Caving in Lozère in the cave of Castelbouc

The cave of Castelbouc is a great classic of the Gorges du Tarn, located 10 minutes from Sainte-Enimie, brings together all that can be encountered in horizontal caving: large chambers, crawling, climbing, concretionary zones​,etc..
Its progression is easy and perfectly adapted to a first approach of the underground environment for both children and adults. It is the ideal cavity for a family outing.

Video Speleology : Caving in the cave of Castelbouc

Description Speleology : Caving in the cave of Castelbouc

After a short walk through the village of Castelbouc, under the ruins of an old medieval castle, you arrive at the entrance of the cave where your guide will give you the instructions necessary for the activity.

The entrance is then via an easy descent followed by a toboggan that leads into a first area called "room of the sub-prefect".

Then after a short climb, you will link with the passage of the "letter box": Small narrow which will lead you to "the room with shells", the starting point of the lower network where you will be able to admire many fossils, witnesses of a time, before continuing your progress until the departure of the ramped part.

Follows part of ramping, interspersed with small rooms, which opens after about fifteen minutes on a large volume. There, the atmosphere changes radically! The spaces are huge, walking becomes easier, in beautiful areas of concretions.

The return will be more or the same way where more complex variants (not mandatory) will be proposed.

For the long version (4 h, 50 euros), you will then have to use an ascending handrail, an area of ​​clay, and another handrail this time descending to arrive at the start of a huge block chaos.

After ten minutes, the blocks give way to wide sandy beaches that extend to an underground lake, the return point of your exploration.

You will quietly picnic on one of its beaches before the opposite way that will seem much easier. Exiting  the cavity can be done via a technical narrowing (not obligatory) for the more daring.

The return walk takes you back in 10 minutes to the car park where you can join the river for some sun bathing.

Localization Speleology : Caving in the cave of Castelbouc

Caving in the cave of Castelbouc

Caving in the cave of Castelbouc 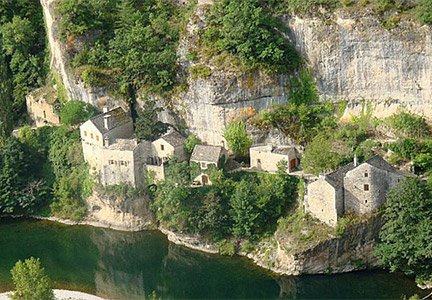 Visit of the village of Castelbouc

.You can combine your activity with the visit of the village of Castelbouc. Old and typical houses of the region, flowery streets and small pebble beach will make you enjoy the beauty of this site and the coolness of the Tarn.