Via ferrata of Liaucous in gorges du Tarn

The Liaucous via ferrata located in the town of Mostuejouls, close to the village of Le Rozier and the entrance to the Gorges du Tarn, is a masterpiece of aesthetics both in the walks (approach and return) and in the wired part.

It is classified PD (Little Hard) to ED (Extremely Difficult) and has several bridges and a zip line.The PD course is not aerial, so it is ideal for a first experience of via ferrata.

Description Via Ferrata : Liaucous via ferrata

You will meet  the guide directly at the carpark of the via ferrata of Liaucous, near the village of Le Rozier. You will find toilets in the carpark as well as a snack bar open during the tourist season.

From here a short approach walk of about 20 minutes will take you to the start of the via ferrata where after you have been equipped with a harness, specific lanyards via ferrata, a pulley and a mountain helmet you will follow the safety briefing of the state certified instructor.

The via ferrata begins with a short easy climb which will take you to a pretty path where the progression is comfortable and without any difficulty. You will then progress on beautiful terraces at altitude where it will be time to take a break and picnic quietly in the sun facing a breathtaking landscape.

Then you will follow a slightly more technical path to reach a first monkey bridge of about thirty meters where you will have to show balance and concentration.

Then follows the passage called "cave", large narrow fault that leads to a small terrace. There the route separates. You can opt for either the PD route, a horizontal progression interspersed with monkey bridges, or for the  ED route where progression becomes much more athletic!

The difficulty lies in very long passages on overflowing parts. The atmosphere is very aerial and a good physical condition is necessary.Then you will have to cross a new monkey bridge followed by a bridge leading to a new separation of the route.

The easy part is gently until the end of the via ferrata, while the ED part opens into a kind of gorge where you can easly distinguish the rest of the route.It passes successively from one wall to another and lead to the last length constituting the biggest difficulty of this last very athletic stretch.

Then the cable stops to make room for a splendid zip line, the ultimate obstacle of this via ferrata of the Gorges du Tarn. The return is by a path that winds down between the rocks in a beautiful landscape to end at the carpark where you can refresh yourself at the snack bar.

Localization Via Ferrata : Liaucous via ferrata 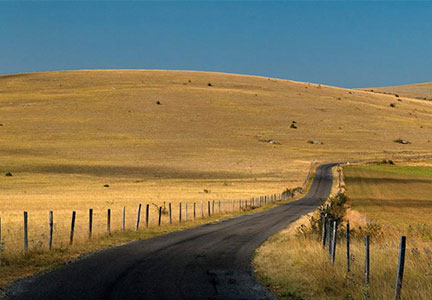